How to Fake a Half-Width Responsive Background Image

I recently ran into a design that had needed background images on half-width columns but that also needed to cover the margins going all that way to the edge of the screen (i.e. outside of the half-width grid column) and I found that the best way to do it was to fake it with a percentage based background position. 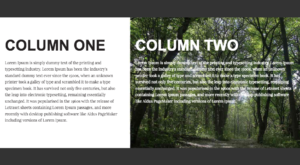 The column on the right takes up 7 of 12 grid column within a max-width container of 1200px. The background image needs to cover the entire right side of the section no matter how wide the screen gets.

So in this case, the html looks something like this, with column one being five of twelve grid columns wide and column two being seven of twelve columns wide.

The columns are nested in a max-width container.  But the whole thing is wrapped in a full-width container – and that’s where the background image goes.  To get the correct placement, I know that the cut-off between the two columns is between five columns on the left and the seven columns on the right.  5 / 12 = 41.67.  So put the background position to 41.67% and the whole thing scales. 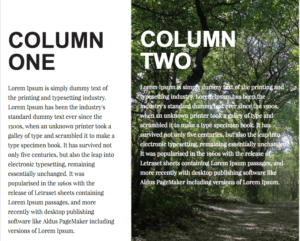 On a narrower screen

On a wider screen

A little tweaking might be needed for extra large or extra small breakpoints depending on the margins of your grid system and how much leeway you have with the design.  In my case, all it needed was a little left-padding on column two to ease a slight change in the position of the background as the screen size changes.